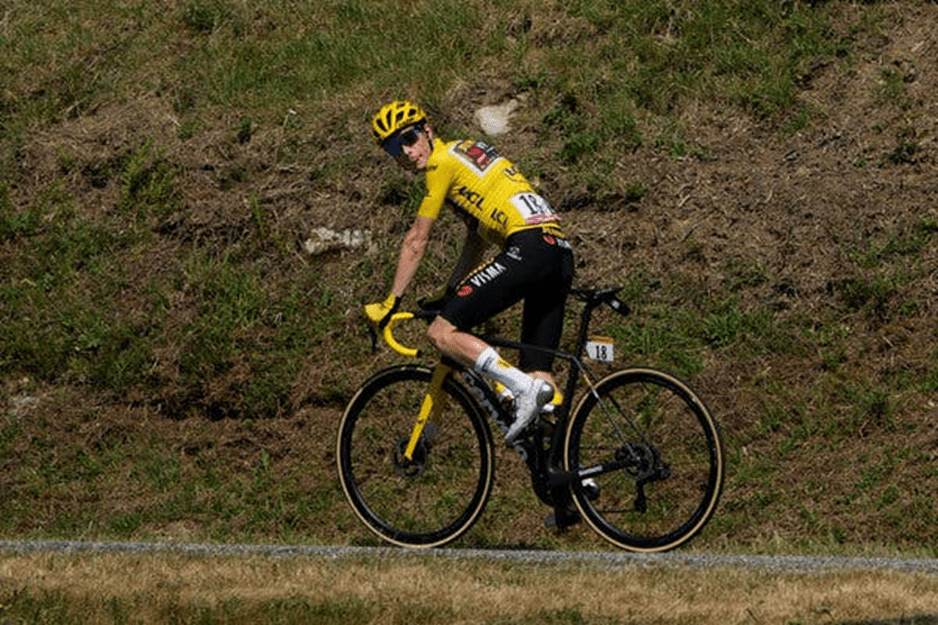 A picture sometimes tells more than a thousand words!

Do you see the cultural aspects in the picture of Tour de France winner Vingegaard waiting for his rival Pogacar?

An episode during the Tour de France 2022 was used in the New York Times to approach the story of the winner Jonas Vingegaard from Denmark showing this picture. (Mather, 2022)  It is a puzzle why this picture was selected rather than showing the final victory. The article stressed the sportsmanship demonstrated by Vingegaard

There had been two moments of drama on the descent before the big climb as Pogacar, looking for any opening, and Vingegaard, watching his every move, zipped downhill together. But, first, Vingegaard, negotiating a gravelly road, wobbled and nearly fell,  one foot popping out of his pedals to keep his balance.

A moment later, Pogacar did fall, but he immediately climbed back on his bike, seemingly not injured too much. Vingegaard slowed to allow him to catch up, a show of sportsmanship acknowledged by a touch of hands between the rivals when Pogacar reached him again. (Mather, 2022)

The invisible aspect of cultural differences is shown in two main perspectives. First, the US New York Times readers have a cultural software that produces a mental image that the winners take all in continuous competition. The journalist has selected the surprise that the leading Vingegaard does not take all but waits for his opponent to catch up. Therefore, this indicates a curiously interestingly different way of understanding competition. Second, Vingegaard from Denmark and Pogacar from Slovenia are socialized into functioning well in societies with low degrees of “masculine” values. For them, the cultural software of the mind tells them you win but want to race again, so you do not destroy your opponent/ you want to keep your opponent safe to race you again.

Vingegaard explained that he expected to race many more times against Pogacar in the future and intended to have a good competitive climate with fair racing. Pogacar understood  Vingegaard perfectly, illustrated by his gesture of the hand. There was a tacit consensus between the two competitors. Intuitively, on their own, they acted intending to have a good working climate in years to come. The act of sportsmanship was also routed in invisible cultural similarities. Several interactions between Pogacar and Vingegaard during the Tour de France support this interpretation. Cultural differences interplay with other not culturally related factors. For readers with a masculine mindset, this situation was interestingly unexpected.

Apart from these points of agreement, the results seem mixed. For illustration, one large study across comparable countries over a period finds that nationality impacts team performance in professional sports teams. (Maderer, Holtbrügge, & Schuster, 2014) A quantitive case study in Germany supports this finding.  (Brandes, Franck, & Theiler, 2009)

On the other hand, if one compares teams in the same international competition beyond national borders, results from a study on the impact on team performance from the UEFA Champions League (2003–2012)  indicate that more heterogeneous teams outperform less diverse ones. (Ingersoll, Malesky, & Saiegh, 2017)

The results of mixed results and the double-edged sword nature of cultural diversity are thus supported in sports team research as well, But also that the influence of cultural difference may vary depending on levels of analysis as this finding may illustrate contrasting results from studies on teams within and with teams across national borders.

Humans have observed and talked about cultural differences forever. Since the cave age, we have come a long way in developing study methods and reporting on cultural differences. Plato’s cave analogy(Macintosh, 2012) offers the basics of the dynamics of observing the other’s “truth” and how challenging it is to report on it. The Plato caves are often used to illustrate the complexities of intercultural sensitivity. (Lowe, 2002)

Both examples of the introduction illustrate ways of seeing the invisible cultural sides of professional sports as a social phenomenon in its context. These two examples are very different ways of seeing hidden aspects of cultural differences. The qualitative and quantitative analysis required interpretation, allowing for factors other than culture to be part of the explanation. Understood in this way, cultural differences are only part of other factors that may explain the situations I used as examples in the introduction.

How to isolate invisible cultural differences.

Suppose we accept that values related to culture are amongst other influencers of behavior and attitude. In that case, we need to find a way to illustrate the relationship between cultural differences and the social phenomenon that we seek to understand or explain. The search for cultural differences is a search where we take away other possible explanatory factors in our attempt to understand. Within-group variation can be larger than group variations, e.g., elite sports teams vary significantly from spare time teams within the same sport and country. Therefore, we need to compare top professional teams of the same sport across countries, i.e., sports teams that are as much alike as possible apart from the country of origin.

In the selection data, equivalence is a primary concern of cultural studies. Here is a recent example showing current concerns regarding equivalence. (Fischer, Karl, & Luczak-Roesch, 2022) Berry’s contribution to the field is to explain the importance of functional equivalence in cross-cultural research. (Berry, 1969, 1989) A narrow, precise sampling has clear advantages. A broader sampling is comparatively less fruitful. Representative samples are the least productive, per se.

Professional sports teams competing internationally are a useful social group for studying groups across cultures using functional equivalence. Controlling factors are important and high in number as they do the same, follow the same rules, etc. More insights on the influence of invisible dimensions of cultural differences may result from further development in the usage of equivalence when studying professional sports teams.

Opportunistic and convenience sampling, e.g., using consulting clients as research sites, require several controls and transparent checks vis a vis equivalence. On the other hand, purposive sampling respecting equivalence may have the challenge of access to data.

The importance of equivalence is valid both for primary data and secondary data. Primary data requires greater access to sites. Interview notes, transcripts, recordings, notes from field observations, and reflective data from individual (diaries) internal records are primary data. In contrast, publicly available are secondary data. Annual reports, articles, books, and transcripts of public meetings, e.g., court cases, social media, and library databases, are secondary sources of information(Taylor & Søndergaard, 2017). Some of the articles mentioned in the introduction use both primary and secondary quantitative data.

An estimate of the quality of the source is a concern in both types of data in terms of how well positioned the source is concerning the information under study.

If transparency is respected, it would be fine to select a football coach who has worked in the same position in different national leagues with the same level of direct exposure to the players if this person’s personal information is compared with other independent sources of information, such as an assistant or relevant secondary data. The next step then becomes the one of accessing the data.

Once the selection is made, accessing the data involves choices that impact the study. These choices may constrain the analysis and the content of the reporting. In the case of research methodology, this is called gatekeeper management. The relationship with the gatekeeper requires consideration as the researcher can become highly dependent on a gatekeeper. Unforeseen events such as job mobility and sickness may impact the access even with initial success(Taylor & Søndergaard, 2017)

An effective way to get to the source of data is through recommendations. Snowballing is a version of this type of access once you specify the qualities of the data source. Another choice here is the degree of involvement of the researcher. Here is the choice of covert or open entry and data collection. The more intimate the insights need, the greater the time the case research will need to be present in the organizational context. Another important consideration is confidentiality issues and handling expectations to maintain a public image. Textbook authors on case research methodology stress that it is important to be conscious of the possible steps in the entry process that must be managed. (Taylor & Søndergaard, 2017)

In short, the invisible aspect of cultural differences surfaces in professional sports teams in the process of data selection and data access important to make the secret of cross-cultural research happen in the combination of levels of analysis maintaining the unit of analysis, i.e., what we are interested in understanding.

We assume that invisible cultural differences are part of many factors to account for differences between comparable sports teams. We also believe that the relationship between the cultural contexts and what we study needs to be respected. We approach the subject as a case study defined as

A case study is an empirical inquiry that investigates a contemporary phenomenon within a real-life context where the boundaries between phenomenon and context are not clearly evident, and multiple sources of evidence are used. (Yin, 1984)

The real-life contexts are social and cultural contexts at one level of analysis with sports teams and the individual behavior of team members on different levels of analysis.

To simplify the many cultural country contexts pointing to the professional work organizations, country cluster studies group countries a reduced number of countries keeping the important differences in respect to work organizations in which professional sports teams are part. (Ronen & Shenkar, 1985, 2013) From the cultural context, it is possible to formulate questions to the data set of importance to the hypnotized invisible cultural differences. For example, (Wursten, 2019a) developed a model of country clusters with similar values indicated as “mental images,” helping to clarify the difference of what is seen as important in social phenomena such as sports teams.

The country clusters are based on the empirical research by Geert Hofstede and are shown below.

Wursten has demonstrated its usefulness in explaining differences between other social phenomena. (Jacobs & Wursten, 2019; Wursten, 2019b, 2020a, 2020b)

Both these frameworks, Hofstede and Wursten, are recommended for their usefulness in the systematic research into Cultural differences

I want to conclude by citing one of the fathers of the research method. Robert Yin said

“check your data and tell a good story.”

A participant of a Ph.D./junior faculty workshop at Sandberg Manor, August 1989, where we in Europe first met Robert Yin, reminded me about this advice which helped the participant in his career. (Jon, 2022) Yin’s words are, in a nutshell, the point I have been trying to make.

Here several points to check our data have been dealt with. Unfortunately, there is no quick fix in checking your data regarding a case study of invisible aspects of cultural differences.

Fischer, R., Karl, J. A., & Luczak-Roesch, M. (2022). Why equivalence and invariance are both different and essential for scientific studies of culture: A discussion of mapping processes and theoretical implications. PsyArXiv. September, 3.

Jacobs, C., & Wursten, H. (2019). The Relationship between Doctor and Patient. An Intercultural Comparison. Journal of Intercultural Management and Ethics, 2(1), 35-43.

Mather, V. (2022, July 22). Jonas Vingegaard All but Clinches Tour de France With Win in Pyrenees. A Danish rider looking to defend his lead instead widens it, effetively finishing off his biggest rival with only days to go. New York Times.

Wursten, H. (2019a). The 7 mental images of national culture: Leading and managing in a globalized world: Amazon Books.

Wursten, H. (2020a). Central and Eastern Europe in a Cultural Perspective. In Understanding National Culture and Ethics in Organizations (pp. 47-62): Emerald Publishing Limited.

Wursten, H. (2020b). There Is a System in the Madness. The 7 Mental Images of National Culture and the Corona Virus. Journal of Intercultural Management and Ethics, 3(1), 7-17.